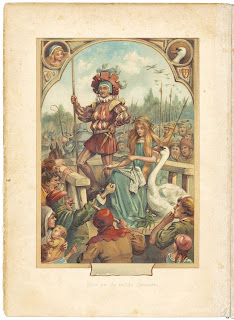 The story is all over the place. A king remarries. The new stepmother turns her stepsons into swans. They go live in an island in isolation. After dark, they turn back into boys, but in the daytime they are cursed to live as swans again. The stepmother, yet to put a curse on the stepdaughter Elsa, decides to put her in a bath, cover her in toads, in hopes that the contact between toad and skin will turn her ugly. It doesn't. The stepmother covers Elsa in dirty, presents her to her father, he doesn't recognize her, she's sent away to the woods. Where she finds her brothers. The story is only about half down and I'm already exhausted describing it.

Best for the possessor of power not to exercise it. It is enough for others to know that he could. Is that the gist of this poem?

The first few pages are beautiful, the latter pages turn the main incident into an occasion to talk about genius. Hazlitt witnesses an Indian juggler sit on the ground and deftly juggle four heavy steel balls. He's amazed. Hazlitt praises the juggler, asks if it is genius, and asks what genius us and how it can be differentiated from talent, aptitude, and so on.

Posted by Billie Pritchett at 10:17 AM