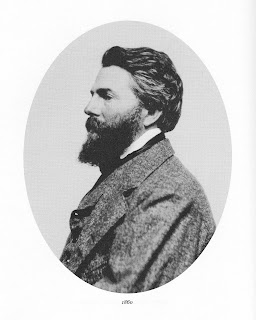 An American sailor meets with a Spanish ship, which turns out to be a slave ship. Everything is as exactly as it seems, the slaves are running the ship, but our hapless American sailor doesn't recognize what is right in front of his face, mistaking the freedom of the slaves aboard the ship as the Spanish crews' camaraderie with them. All is explained in the postscript, the trial following the events of the story. Long, tedious, lacking in suspense, a one-trick pony whose joke wears out long long long before the story ends.

A poem that is a slice of the life of an elderly beggar making his rounds seeking alms door to door. Not just any old slice of life here, but the terminal slice.

A celebration of ordinary experience, a contradictory case. Who is the fairer? The person who cultivates experience so as to make ordinary life more extraordinary, or the person who lives without pretense, experiencing his ordinary days? Beats me. Beats Emerson.

Posted by Billie Pritchett at 1:35 PM