Exercises in storytelling (showing versus telling) 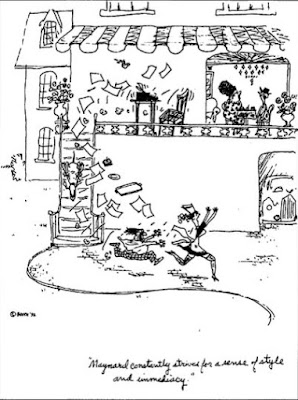 Showing versus telling. While it is good to have a blend of both, contemporary fiction favors setting a scene by showing the action, not narrating it. Here are some writing exercises to improve showing versus telling in writing fiction from Renni Browne and Dave King's Self-Editing for Fiction Writers, Second Edition (New York: HarperCollins, 2004, 20-2).


Spot the telling in the following and convert it to showing. The answers (at least, our answers) appear at the back of the book.

1. "Mortimer? Mortimer?" Simon Hedges said. "Where are you?"

"What in blazes are you doing perched up there?"

Mortimer Twill explained to Simon how his long-awaited copula and weather vane had finally arrived. He just couldn't wait for Simon to install the gadgets, so Mortimer had decided to climb up to the roof and complete the installation himself. He was still sorting through the directions.

"Come on down before you kill yourself," Simon said. "I swear I'll put them up for you this afternoon."

2. I'd known Uncle Zeb for years, of course, but I didn't feel like I really knew him until that first time I walked into his shop. All that time I'd thought he was just kind of handy, but looking at his tools--hundreds of them--and what they were and the way they were organised, well, I could see he was a craftsman.

If you're in an ambitious mood, take the following bit of narrative summary and convert it into a scene. Hint: feel free to create any characters or elaborate on the settings.

3. Once you got off Route 9W, though, you were in another world, a world where two streets never met at a right angle, where streets, in fact, didn't exist. Instead you had "courts," "terraces," "ways," a "landing" or two. And lining these street-like things were row on row of little houses that could be distinguished, it seemed, only by the lawn ornaments. Travelers who disappeared into the developments had been known to call taxis just to lead them out again.


Here are, for better or worse, my rewrites of each passage to make them show more than tell.

"What in blazes are you doing perched up there?"

"Behold, the rooster!" Mortimer cried. "It's finally here. Oh, how I can't wait to wrap it in these Christmas lights! And attach this speaker to the mouth so that it can crow in the morning! But oh, where did I put that schematic? No. No, not there... Oh, so many gadgets to affix. Important thing is the Christmas lights, you see!"

"Come on down before you kill yourself," Simon said. "I swear I'll put them up for you this afternoon."

2. The bell jingled above the shop door. "Hey, Uncle Zeb!" I called.

"Hey, sport," he said, not looking up from the table he was sanding.

"Wow," I said, looking along the walls. "You have so many tools."

"Hah! You need a lot of tools to do carpentry."

"They all look like new," I said, running my fingers along the grip of a red miter saw suspended from the wall, everything beside it laid out in neat rows. I turned to look at him, as he scrubbed at the tabletop with his steel wool. "You must really take care of your things."

3. "Where are we?" Vin asked. Just off Route 9W, we had entered another world.

"You're driving in circles!" Vin said.

"I'll know it when I see it," Serena said. "It's the one with a lawn gnome in the front yard leaning on his golf club."

"That's it. Not going to go through with this." He stuck his thumb out the open window. "Taxi!"

Here are the books' suggestions for rewrites (235-9). As you can see, many of the rewrites they suggested are either (a) more to the point or (b) more creative. To be expected, since the writers of the book are professional editors and I still have a whole lot to learn.


1. A fairly simple one to start with. The writer breaks into the middle of a conversation to summarise one of the responses for us. Convert that bit of narrative summary into dialogue, and the scene works much better.

"Mortimer? Mortimer?" Simon Hedges said. "Where are you?"

"What in blue blazes are you doing perched up there?"

"The cupola and weather vane finally got here," Mortimer said. "I couldn't wait all day for you to install the gadgets, so here I am."

"I'm still sorting through the directions."

"Well, come on down before you kill yourself," Simon said. "I swear I'll put them up for you this afternoon."

2. A slightly different approach to showing and telling. Rather than simply describing the effect the shop had on the narrator, describe the shop itself and let it have the same effect on the reader. As in:

I always figured I knew Uncle Zeb, until the day I walked into his shop.

It was a small room, not much bigger than most kitchens. But it was packed full of junk. No, not junk, junk isn't that well organized. Stuff. Two of the walls were covered floor to ceiling with those metal shelves you see in library basements, and those shelves were full of neat little boxes with labels like "Bearings and Races" or "Angle Brackets, 3/8 and Larger."

And the tools! There was a drill press in one corner next to the metal shelves and a lathe along the opposite wall. And a pegboard up above the workbench with two rows--two whole rows--of screwdrivers. There was a row of hammers--huge ones with big flat heads and little bitty ones with pointy heads, and some made out of rubber and some of lead. There were twenty-one different pairs of pliers (I counted), from big thick ones about a foot long to thing things that were almost tweezers. There were tools I couldn't even recognize, things that had been made to do just one job and do it perfectly.

These weren't a handy guy's tools. A handy guy can keep all his tools in a drawer or in a box in the garage. No. These belonged to a craftsman.

3. Of course, no two versions of this exercise are going to look alike. Here's our take on the piece:

Roger realised he'd made a mistake about five minutes after he tried the shortcut off of 9W. He'd been through about six intersections, and none of them had met at right angles.

He stopped to read a sign by the light of a streetlamp. Terpsichore Terrace. He didn't think he'd seen that one before, so he took a left.

Two lefts (Xanadu Drive, Lenape Lane), a right (Camelot Court), and a few long, gentle curves later, he was back on Terpsichore Terrace. He couldn't be at the intersected he'd started at--he'd come too far for that. But the Blessed Virgin under the upturned bathtub in front of him did look familiar.

No, the other one had marigolds in front of it, and this one had... well... something else.

He pounded the steering wheel. All he wanted was a street. Something called "road" or "route," or even "avenue." Something with yellow lines down the middle. Something that went somewhere.

He parked, walked up to the Blessed Virgin's house and knocked. At least he could hope for a Christian reception.

"Sorry to bother you this late, but I seem to be a little twisted around. Can you tell me how to find 9W?"

"Of course. Let me see." The man stepped onto the parch and peered into the night. "What you want to do is turn around, then follow this road, Terpsichore Terrace, until it becomes Belleville Drive. Then you would take the ... let me see..." He began to tick them off on his fingers. "The fourth right--I can't recall the name of the street right now. Then the first left and follow that road until it ends."

Twenty minutes later Roger was facing a small, square house with a cast-iron deer in the front yard. On Xanadu Drive. Doubtless just a stone's throw from Terpsichore Terrace. He walked to the front door and pounded.

Ten minutes later, the taxi pulled up behind his car. "What happened, Mac, you break down?"

"No problem. 9W's about six bucks from here."

"Why should I be? You're the third one so far this year."

Just a few quick comments on what is amazing with the Browne and King's editing jobs in the above passage. There is a firm understanding that there are different ways you can show something in a scene. You can do it by describing what's in a character's immediate vicinity, for one, or you can have the characters make the scene come to life through dialogue. You need to switch to one or the other to best paint the scene.

A mistake I made in some of the above re-writes was trying to let dialogue do too much of the work. In fact, what I have in some of those passages is just more telling but sandwiched in to dialogue. Probably would have been better to build the scene using more sensory experiences for the characters.
Posted by Billie Pritchett at 3:17 PM