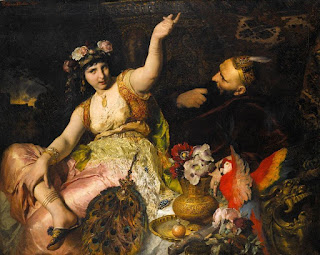 Single-parent cowboy who lost his wife must raise his two daughters, which isn't easy in a world where folks will kill a man to get to his gold. Despite the story's title, there's not much justice here. For one, the plot's climax is poised to take place off-page. For another, were the climax to take place on-page, it wouldn't be justice. A vigilante killing a man because he found out the man killed another is not justice. Frontier justice, maybe, which isn't justice at all.

A short, slick poem about how the day Dante met Beatrice, a new chapter was written in his life.

In his quest to regular what is and isn't cinema canon, Roger Ebert deemed Stanley Kubrick's 2001: A Space Odyssey as one of the great movies because of its lingering shots of astonishing visuals and its use of classical music, the repurposing of which for the key film scenes makes you think less about the music enhancing the scenes than the scenes enhancing the music. Ebert delights in the fact that 2001 eschews conventional plot. Not entirely correct. As Ebert confesses, the movie is a quest plot, and there is a primary agent in the film, astronaut David Bowman (Keir Dullea), who overcomes evil AI HAL and literally finds himself down a wormhole in space. The film is about humankind's quest to know, especially to know about the greatest subject one can, oneself. All pretty well-captured by Ebert in his review, but what is lacking is any vitality, anything that would set Ebert's essay about from any amateur's writeup on 2001. Just another instance of Monday-morning quarterback, acknowledging a film as great after everyone else has said it's great. And is 2001 great? Well, it's certainly pretty. Pretty boring.

Posted by Billie Pritchett at 1:15 PM