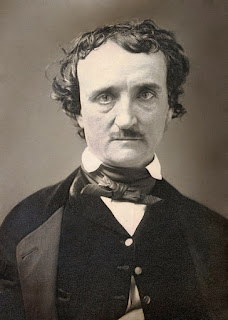 The older I get, the more my hairline resembles Poe's in this daguerreotype.

"The Affair at the Victory Ball" by Agatha Christie (story)

The world's most beloved Belgian detective Hercule Poirot is presented with a case involving wealthy friends who costume themselves as stock characters from Italian comedy one night, and on this night they do more than have a party and attend the theater. One man winds up laid out on a dinner table, stabbed in the chest with a knife, and a woman winds up laid out on her bed in her room, overdosed on her favorite drug cocaine. Poirot is able to solve the case handily without ever visiting either crime scene. A laugh-out-loud moment that comes in the story is when Poirot, not having visited the scene, deduces that the restaurant where the man was stabbed in the chest must have had a long curtain over the window behind which the murderer hid.

"Sohrab and Rustum: An Episode" by Matthew Arnold (poem)

Sohrab and Rustum is an epic poem, about 900 lines, in which two Middle Easterner warriors battle each other so that their respective peoples can return to their lands, the war between them over. Sohrab is the younger man, and he does not want to engage the aged Rustum in battle. Rustum takes this as a sign of cowardice but too late does Sohrab plead his case that he is in fact Rustum's son, separated from both so long ago. Rustum realizes he was wrapped up too much in his own honor and that he has done the unthinkable, taken his son's life.

"The Philosophy of Composition" by Edgar Allan Poe (essay)

You may think the poet sits and with swift fingers composes his piece willy-nilly but no, says Poe. There's a hidden mathematics to the craft. Poe explains how he composed his famous work "The Raven." First, he said to himself that since poems should be able to be read in one sitting that his poem should not be too long. He settled on 100 lines. Then he decided what his artistic thesis was going to be, which was (and always should be when it comes to art, says Poe) Beauty. How best to capture the yearning for Beauty than with its loss, as when a loved one dies? Ah, so the poem will concern a man pining for his lover who has passed away... Best to spare the details, because it's unlikely that any of what Poe writes in his essay is true. No writer on a first pass is as methodical as Poe claims, but of course during revision, when the writer must view his or her work with fresh eyes, the writer must be thoughtful about all the decisions that went into making the work what it is and eliminate anything that is unnecessary in achieving the work's end. Poe biographer Kenneth Silverman has argued that "The Philosophy of Composition" was an exercise in satire. Doubtful. More a cheerful web of lies. "You ask me how I arrive at my ideas? This is how."

Posted by Billie Pritchett at 10:06 AM