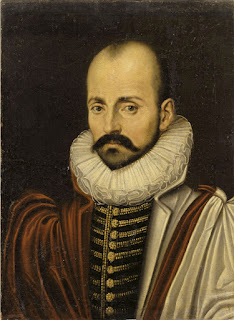 "Something lacking in our civil administrations" by Michel de Montaigne

Montaigne laments the fact that local governments do not have a place where we can go to make public requests for anything we want or need. One of his examples is someone wanting to sell some jewelry. Someone goes to a public office, says "I want to sell some pearls," the office posts a notice, and then maybe someone comes along who wants to buy pearls. Another of his examples is someone wanting to organize a trip. He or she could post a notice and then other people would come along and form a little group to do this.

It may seem there's no need of a service like this when we have the internet. For instance, people who want to could create a Facebook group for their community and then people could post and respond to public notices. That's not such a bad idea, and surely plenty of communities have made use of a group like this. But what is still lacking from the internet is civil society. As uncomfortable as it may be sometimes and less convenient, there's value to getting together in public spaces and having to interact with people from your community.

At the end of Montaigne's essay, he thinks it a shame that some great individuals, some of whom he knew, have died because of lack of food, when Montaigne thinks it likely that there would have been people who would have gladly fed them and served as patrons to them if only they had known it--if only, that is, there were some administrative office similar to what he's advocating that would have notified others about these individuals struggling to feed themselves.

Notice that Montaigne is only thinking about whom he regards as great individuals (he actually says "great man"), so we can easily see the limits of Montaigne's thinking. As brilliant as he was, he was a snob. Nevertheless, you would think that Montaigne was nominally a Christian and would have believed that a civil administrative service could deal with public charity for everyone who might be regarded as less fortunate.

In this set of readings, one story ends, another begins, and then a story within that story also begins. I will focus on the outer story that begins. A man suffering from kyphosis, that is, with a curved upper back, dies while eating a meal, and so one person, to absolve himself of the responsibility, takes the corpse of the man to a physician, leaving the dead body on the stairs. The physician trips over the body, tumbling down with it, and it leads him to believe that he has killed this man who was already dead. The physician and his wife carry the body up to the roof, drop it down a chimney, and then the people on the other side mistake the body for a man trying to enter the house, the inhabitants of the house thwack the dead body in the chest with something heavy, and now they believe they killed the man. A similar series of events occurs once or twice more and then when the constable thinks he catches someone in the act of killing the man who has been long dead, the constable takes his prisoner to the sultan who is ready to hang him in public. Then someone in the crowd confesses to having killed the man and then another and another and so on until we arrive back at the beginning when the man kyphosis had choked on the food.

These are the kinds of tales you will find in The Arabian Nights, folk tales, often related to mortality or sexuality, which should come as no surprise considering the circumstances under which the stories are being told. In the larger story that frames The Arabian Nights, a sultan has taken several brides, slept with them all, and killed them. He is doing this as a means to seek vengeance on the wife who slept with other men. He has become a misogynist and wants women to suffer. He has vowed to marry every single woman he can find, consummate the marriage, and have her executed. But in the final instance, he takes a wife named Scheherazade whose story so captivates the sultan that when she doesn't finish it the night of their wedding consummation, he postpones her execution. Cleverly, every night after that, she either begins another story after ending one or cuts off in the middle of the story or begins a story within a story that will need resolution the following night and the following night. All in all, she tells 1,001 stories, hence the alternative title of the book, Tales of 1,001 Nights. So back to what I said before, that these stories mainly relate to mortality and sexuality. The sultan and Scheherazade have intercourse every night and then she must tell a story to keep herself from being killed. It is obvious then why those themes are forefront in her mind as she spins her yarns.

"The Dance of the Happy Shades" by Alice Munro

This short story involves a young girl going with her mother to visit an older woman in the community named Miss Marseilles. A lot of the townswomen have gathered for a party at Miss Maseilles' house where in addition to catering to the girls of the town, this party has been set up where some children with Down syndrome from a special needs school can showcase their piano talents while the women and their daughters can watch. I can't say anything more intelligent about this story that hasn't been said HERE.

Posted by Billie Pritchett at 9:45 AM