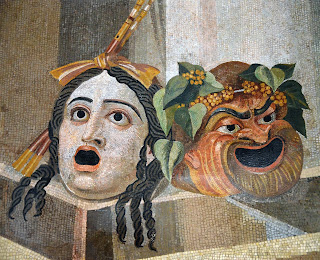 Caesar had long sought the head of his rival Pompey but when presented with it, he wept. Some of Caesar's critics accused him of pretending. Montaigne, however, thinks that this is a classic case of having another conflicting emotion albeit not the dominant one that a person leads with. Montaigne writes, "While it is true that most of our actions are but mask and cosmetic, and that it is sometimes true that behind the mask, the tears of an heir are laughter; nevertheless we ought to consider when judging events how our souls are often shaken by conflicting emotions."

Montaigne views our emotions like different players on a ball field. Only one emotion can have the ball at one time but often the ball gets stolen so deftly no one notices. "Although diverse emotions may shake our souls, there is one emotion which must remain in possession of the field; nevertheless its victory is not so complete but that the weaker ones do not sometimes regain lost ground because of the pliancy and mutability of our soul and make a brief sally in their turn." And so it continues.

A man has his hand cut off for selling a necklace that belonged to a woman he was accused of murdering. On Night 28 of The Arabian Nights, it was told that he had met a beautiful woman, they had slept together four nights, and on the final night this woman brought another younger woman along. Jealous of the younger woman's beauty, the beautiful woman cut the younger woman's throat while this woman and the man slept. The man buried her beneath the floor of the house and on this night, Night 29, it is told that he is selling her necklace. Someone recognizes the necklace as belonging to a member of the royal family, the vizier's daughter's necklace, I believe, so the man is arrested and his hand is cut off. The vizier eventually sits down with the man and asks him to be honest and say how he came to acquire the necklace. He recounts his story, and the vizier confesses that these two women mentioned were his daughters. He mentions that the daughter that slept with him was jealous of her younger sister and contrived to have her killed. But, the vizier says, this man is in lack because his youngest daughter is unmarried and so to compensate the man he allows the man to marry this youngest daughter and to receive untold riches.

Yes, these are the kinds of stories in The Arabian Nights: there is plenty violence and sexuality, which might seem surprising to modern audiences, but consider only the popularity of a movie like Kill Bill in which in one scene about 100 people get hacked to pieces and blood sprays. Or consider the success of the Saw films upon their release, films that delighted in the torture of people. Arabian Nights pales by comparison.

"Something I've Been Meaning to Tell You" by Alice Munro

A woman tries to kill herself over a man she loves. This story's narrative is a little difficult to tease out beyond this. It could be my failing in the reading.

Posted by Billie Pritchett at 8:24 AM