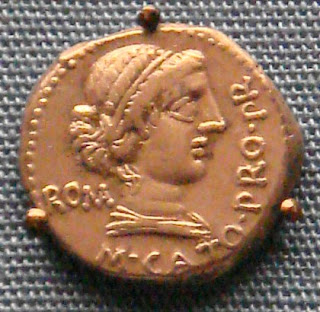 "On Cato the Younger" by Michel de Montaigne

Cato the Younger famously opposed Julius Caesar and when there was a war between Caesar and Pompey, Cato supported Pompey. When Pompey lost and it looked as though Cato would be captured, he committed suicide.

Montaigne wrestles with this point in this essay and suggests that when appraising great figures of the past for their actions, we ought to be charitable in interpreting their intentions. Montaigne writes, "Those rare persons who have been hand-picked by the wise to be exemplary to us all I will not hesitate, on my part, to load with honor, insofar as my material allows, by interpreting their characteristics favorably." Rather than judge Cato cowardly in his final act, we can see it as his final defiance of Caesar.

But the point generalizes. We are all also capable of taking an ecumenical view toward people if we so choose. "I do not suffer from that common failing of judging another man by me: I can easily believe that others have qualities quite distinct from my own. Just because I feel that I am pledged to my individual form, I do not bind all others to it as everyone else does: I can conceive and believe that there are thousands of different ways of living and, contrary to most men, I more readily acknowledge our differences than our similarities."

Awesome story. A small-town Canadian girl goes out traipsing around farmland with her dad who has set traps to catch rats. He's going to each of us traps and bagging the dead rats. Then they come upon a man who lives in the woods in a house in the ground. Either he burned his own house down or he thinks someone else burned his house down. In any event, instead of building a new house or moving, he has just built into the earth and then put a roof over it. This guy is nuts. He gives his cat whiskey. He carries around a hatchet and threatens to kill anyone who tries to come around and burn down his place again. The little girl is spooked by the man and her father tells her not to tell her mother about the man carrying the hatchet.

Posted by Billie Pritchett at 5:39 AM