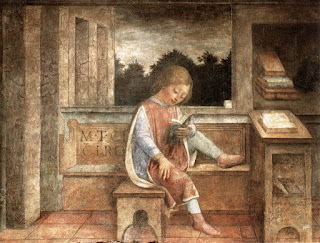 Montaigne criticizes Cicero for favoring style over substance. Meanwhile, Montaigne favors substance over style, sometimes to the fault of the depths he could dive in the examples he draws or the arguments he makes, which he thinks has a lot to do with his temperament not to want to sustain a text. "When I hear anyone lingering over the language of these Essays I would rather he held his peace: it is not a case of words being extolled but of meaning being devalued; it is all the more irritating for being oblique. I may be wrong but there are not many writers who put more matter in your grasp than I do and who, with such concern for this matter, scatter at least the seeds of it so thickly over their paper. To make room for more, I merely pile up the heads of argument: if I were to develop them as well I would increase the size of this time several times over. And how many tacit exempla have I scattered over my pages which could all give rise to essays without number if anyone were to pluck them apart with a bit of intelligence. Neither they nor my quotations serve always as mere examples, authorities or decorations: I do not only have regard for their usefulness to me: they often bear the seeds of a richer, bolder subject-matter; they often sound a more subtle note on the side, both for me, who do not wish to press more out of them, and also for those who get my gist." When his attention flags, Montaigne can't sustain a piece of writing. He says he does better with letters because then he has an audience of one and a clearer focus on sticking to the subject.

The barber from the previous story who was harassing the young man now comes before the caliph and the barber begins to tell what separates him from his brothers. His first brother has a crooked spine. The barber relates how because of his disability, a beautiful woman nearby plays a prank on him to make it look as though he tries to break into her home and assault her. This brother is carried to the police, he is almost killed, but then the barber intervenes.

The second brother is called the babbler. He also has a type of disability which the barber is vague about. The barber calls it a semi-paralysis. This second brother is brought into a wealthy person's home by an old woman. She promises the babbler riches and marriage to a beautiful woman if only he endures the several beatings he is given throughout the night. The night ends before the story can be finished.

There are plenty of extremely cruel jokes, cruel humiliations, and torture here, which reminds me: Don Quixote is given too much credit for the novelty of its satirical cruelty. It's right here in The Arabian Nights circa the eighth century. The writers and the audience are aware that these stories are cruel and just like the Quixote audience, we are supposed to laugh at all the trouble that befalls these people. Shame.

This is a great story. The narrator is married to an engineer from a former Soviet satellite country but she was previously married to an English professor called Hugo with whom she has a daughter. The narrator tells us she doesn't keep up with her ex-husband's work but that her new husband does. He has just bought a literary journal that Hugo has published a story in. She reads the stories and recognizes a story from their shared past. This is definitely a story worth reading.

Posted by Billie Pritchett at 8:07 AM