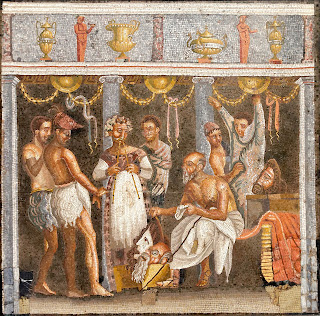 "On not sharing one's fame" by Michel de Montaigne

"Of all the lunacies in this world the most accepted and the most universal is concern for reputation and glory, which we espouse even to the extent of abandoning wealth, rest, life and repose (which are goods of substance and consequence) in order to follow after that image of vanity and that mere word which had no body, nothing, to hold on to."

"When you have said everything to disavow reputation, and believed all of it, it still marshals such an inner persuasion against your arguments that you have scant means of holding out against it. For, as Cicero says, even those who fight it still want their books against it to bear their name in the title and hope to become famous for despising fame."

A barber tells the caliph the many ways his brothers who have disabilities have been humiliated. As the introduction of my volume of The Arabian Nights states, "The storytellers here have a ruthlessly mocking attitude towards mutilation and misfortune. The streets of Baghdad, Cairo and Damascus teem with one-eyed, one-handed men and hunchbacks, and each mutilation or deformity has its own story."

I don't remember the story well. I read it a couple days ago and have forgotten most of the content. What I do remember, though, is that a young female narrator is wrestling with the meaning of "royal beating" and the kind of physical abuse children her age receives.

Posted by Billie Pritchett at 8:39 AM