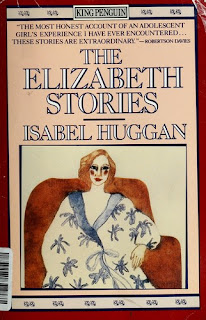 "Sorrows of the Flesh" by Isabel Huggan

A great short story about a high-schooler named Elizabeth in small-town Ontario. An American from Ohio comes to town named Mister Wheeler and becomes her biology and homeroom teacher. Elizabeth develops a crush that inspires her to want to sign up for the basketball team since Mister Wheeler also coaches. Elizabeth makes every effort to get closer to Mister Wheeler and his family. Meanwhile, things are rocky in her household between her mother and father. Her father has been working as a bank manager for 27 years and he's gotten a job offer to move to a different branch. Elizabeth's mother doesn't want him to take the new job because that will mean the family will have to uproot and take a job farther out in the sticks. But she also doesn't want him to get involved in this new self-employed enterprise he's started talking about even though it will keep the family there in their town... This story is one of a series of linked stories called The Elizabeth Stories. The writing in this story makes me want to read the whole collection.

"On the inequality there is between us" by Michel de Montaigne

Montaigne is not so naive as to think that there is no inequality between us but he thinks the only inequality worth acknowledging is the difference between the wise and the unwise. Everything else is pomp and circumstance. "Why do you judge a man when he is all wrapped up like a parcel? He is letting us see only such attributes as do not belong to him while hiding the only ones which enable us to judge his real worth. You are trying to find out the quality of the sword not of the scabbard: strip it of its sheath and perhaps you would not give twopence for it. You must judge him not by his finery but by his own self." Yes, Montaigne, but as a psychological fact, this is what we do. Perhaps we shouldn't but we do. Perhaps there is no getting around this as the default condition. You can't squeeze a stone and expect the pressure of your grip to transform the stone into a potato.

Montaigne also makes a good point about the respect that people in power seem to receive. He writes this, quoting Seneca. "The honor we receive from those who fear us is not honor at all: their respect is due to my royal state not to myself." We could always ask ourselves, If the person were stripped of some honor, would people respond to them the same way based on their wisdom? If not, what they have is not real honor, Montaigne would say.

Finally, it's important to say what kind of wisdom Montaigne believes that it is important to have. Like Aristotle and the Stoics before him, he believes in practical wisdom, the kind that can help you guide you through this life in order to lead a good life. Wisdom then for Montaigne is primarily geared toward morality. His final quote is telling. "People's morals shape their destiny."

The barber tells the caliph about all his other brothers who because of physical disabilities have been humiliated in their lives and for whom the barber has had to rescue. The caliph thanks the barber for sharing the story of his many brothers and releases him. Thank goodness. This prolix barber's story was very tedious and had passed beyond the point of being in on the joke that he's a tedious storyteller to being a victim of that tedious storytelling. Before Night 34, a new tale is begun but I've already forgotten what it is.

An almost wonderful essay on the destruction or loss of art pieces. "In platonic terms, an original work of art is always a copy, a shadow, a contemptible substitute for the first idea, even if the idea was achieved through an accretion of spontaneous gestures. A destroyed work of art, then, returns the idea to its perfect, primary state. As for fragments, they exist in a limbo, neither here nor there." Okay, so this is interesting. Bego is taking that wonderful idea from Plato and taking it as truth. Plato believed that the pure work of art exists in some ideal space and that the artist's job is to translate the work into the earthly realm. But in such translation, the ideal work can never appear as perfect as its original.

The reason Bego is exploring this idea is because he believes that even if we don't literally subscribe to Plato's metaphysics, we do seem to have this idea that an original work of art is the true one. Bego is pushing back on this. What about a work like Aphrodite of Knidos by Praxiteles? This is a sculpture whose original has been lost to time. We have only replicas of it, all of which differ in detail. Are the replicas any lesser than the original? We seem to believe so by default. Or consider a Picasso. We hear of a rare find of one of Picasso's works. Critics see it, appraise it, place it on the art-historical continuum, judge it relative to Picasso's other works... And then we hear that it's a forgery and all the power of the painting is drained from it. Bego wants to say that if it's true that we value the original so much, why not value the sketches of the original, the early drafts, the early molds? Are they no less original than the original? Why don't we value the idea itself, the ideal itself? And this is how he gets to Plato's idea and argues that in a way a work destroyed "returns the idea to its perfect, primary state."

Assuming for argument's sake this could be a position we could take toward it, let's look at this paragraph that Bego writes near the end of his essay. "A work of art is only truly independent when it is destroyed. Only then is it reduced to its essential self, being no longer parasitic on our gaze and consciousness, and no longer cannibalized the gaze and consciousness of copyists. That is its essential paradox: it is most itself when it isn't, when its aura has been disembodied. Not to sanctify the Bazarovs of the world, armies of iconoclasts, fanatics of the ilk of ISIS or Savonarola, or curators of Entartung, but the disappearance of works of art raises these troubling questions of ontology. One could even go so far as to say that Shakespeare only becomes Shakespeare when he dies, when all his instances have been played out in space, when the list of his works can no longer admit addition, when you can put a terminal date in his biographical parentheses. And so with all of us." O Bego! O humanity!

Unfortunately Bego in the above shrinks from his own conclusions. He argues that a work of art is most perfect when it is merely a gleam in its daddy's eye. He further argues that a work of that is destroyed returns the thing to its "perfect, primary state." But here near the end he writes that we don't want to glorify terrorists or iconoclasts who have and do destroy art. However, if you take the argument to its logical conclusion, these people must be Bego's heroes. Watch him shy.  Instead of accepting the conclusion, he writes that all these raising "troubling questions of ontology." Is that all it does?

As beautiful as the writing is, the position needs some work. Here's how to think about it and actually a position that I think is closer to Plato's. This is what Bego could have said but didn't. He got himself tangled up in a bunch of cords, poor thing. All right, the Platonic conception. A work of art is most pure when it's an idea. It is then in its ideal state. It is the artist's job to translate that idea into a reality. Since the real work of art is always a translation or copy of the ideal, it's never going to be as good as the idea. But absent the artist translating the idea, it would never exist. But pace Bego and the art terrorists, it is precisely because the art has lost its translation that we should in fact mourn the loss or destruction of works of art. Far from returning art to its "perfect, primary state," the destruction of art cuts off access of other people to that art. Thank goodness we do have copies of Praxiteles' Aphrodite of Knidos but we want the original because we want to see what the copyists of the original had seen. We want as close an access as possible to the idea Praxiteles saw in his mind's eye. The reason Bego's reference to Shakespeare seems so incongruous there at the end of the paragraph above is that it points out how false the comparison is between Shakespeare's death and the destruction of art. We mourn the loss of art because we never have access to the idea that the artist had tapped into there. Likewise, we mourn the loss of the artist because he or she with his or her skill can no longer grant us access to some of these other amazing ideas which we otherwise would not see because we are not artists. This is a romantic conception, and Plato's conception, and closer to what Bego could have pushed for and didn't.

Posted by Billie Pritchett at 6:01 AM