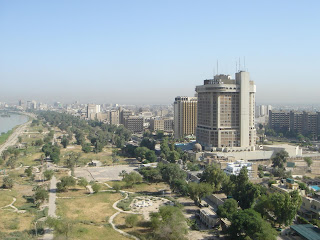 "Iraq: The War of the Imagination" by Mark Danner

If there's any thesis to Danner's essay, it's that the GWB administration didn't know how the Iraqi war would turn out and now neither do we. This was written four years into the year. We're nineteen years into the war with no signs of it ending. Now of course you could say that the toppling of Saddam Hussein was the end of the war, but in the administration's own framing, this was Phase One, and Phase Two was what to do next. The first thing they did was call for a de-Baathification of the country, that is, a dismantling in all its forms of Hussein's Baath party, which drove the party members underground.

The second thing the administration did right away was to dismantle the Iraqi military because it had been Hussein's military, and it was feared that these soldiers would still have loyalty to the old regime. As you might imagine, this led the country to erupt into civil war, and there was a grand looting of cities since no one was in charge.

The last word from the war is that in fact there never was a Phase Two, the war has been one, and that there will be a permanent American military presence in the country.

A married woman is left by her husband and she is left alone all day. She stops taking his calls, then she stops talking all calls, and is left alone with her work, work that is not named in the story, just work, the kind involving books and papers, the kind that can be done with the books and papers spread out in front of you at the coffee table. This woman who was already fastidious about keeping up her hygiene and appearance is even more fastidious now that she is alone. Yet when she discovers that she has a tick on the crown of her head, hell breaks loose, she feels she needs to remove it herself, and when she can't, in the final moments, exhausted with dealing with it herself, hopes that the voice on the other end of the phone she answers is her husband, ready to reconcile, to couple again, to have a baby.

I love this little story but it strikes me that the appeal of it probably lies in the unconscious connection the reader is supposed to draw between the tick, the absent husband, the baby. In truth, I think there is none, but the reader, desiring to make sense of the story, wants everything to fit. In this way, Oates was successful. That's what all writers want to do, tell the tale and get away with it.

Posted by Billie Pritchett at 4:12 PM