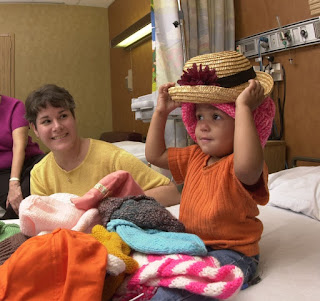 "People Like That Are the Only People Here: Canonical Babbling in Peed Onk" by Lorrie Moore

Notes up front. "People like that are the only people here." These are the parents whose children have serious illnesses (tumors, cancers) and who come off as dopily optimistic to the Mother in this story.

"Canonical babbling" is a designed period in a child's life when he or she spends a lot of his or her time babbling, a period that comes before the onset of spoken words.

"Peed onk" is pediatric oncology, the area of medicine that deals with treating the cancers of children.

It's discovered in this story that the Baby has a malignant tumor on his kidney. This sends the Mother into a spiral. The only way she knows how to deal with it is to joke about what is happening, to turn every situation into sarcasm, irony, wit.

"What we have here is a Wilms' tumor," says the Surgeon, suddenly plunged into darkness. He says "tumor" as if it were the most normal thing in the world.

"Wilms'?" repeats the Mother. The room is quickly on fire again with light, then wiped dark again. Among the three of them here, there is a long silence, as if it were suddenly the middle of the night. "Is that apostrophe s or s apostrophe?" the Mother says finally. She is a writer and a teacher. Spelling can be important—perhaps even at a time like this, though she has never before been at a time like this, so there are barbarisms she could easily commit and not know.

Since addition to being a writing professor the Mother is a writer, the Husband advises her to take notes regarding what is happening. She resents this. She asks the Husband indignantly how someone could write about something so horrific. This is the metafictional through-line of the story.

"The Freedom to Offend" by Ian Buruma

Buruma uses the occasion of Mel Gibson's recorded anti-Semitic comments while drunk as a means to talk about what can and cannot be said and to whom one is beholden to when one expresses prejudices or discriminatory views. Communal pressure groups that receive regular media exposure come under scrutiny here because the media coverage seems to compound the problems and give power to the groups. The fear Buruma has is that offensive ideas will not be able to be expressed. He contrasts Gibson's case with the killing of Dutch filmmaker Theo van Gogh, murdered in 2004 for his offensive portrayals of Muslims in motion pictures. Perhaps Buruma doesn't take the contrast serious enough. Buruma was killed by a private citizen who was motivated by religious sensibilities whereas Gibson was pilloried by leaders of organizations that claim to be heads of religious and ethnic groups. The distinction matters, I think, but I still don't know what to make of it. What complicates the issue and what seldom gets addressed is that there is no one such thing as freedom ever. Imagine a society without any coercive government. There would still be private citizens who would want to do harm to others for what others say or how they express themselves. There would still be pressure groups that would want to police what others say or how they express themselves. Regarding the former, things seem pretty clear. The freedom a private person has to be offended butts heads with the freedom another private person has to offend. But any bodily harm to the other person cannot be justified. Regarding the latter, it seems to me that the freedom of the group butts heads with the freedom of the individual. The point is there is never just freedom, full-stop. There are freedoms, plural, and these freedoms rub up against one another. Let's add a complication. Suppose a pressure group wants someone fired for his offensive remarks or sense of expression. This is where things get tricky and why I suppose Buruma wants to think the Gibson and van Gogh cases are of a piece. The truth, I think, is that there are no easy answers or even right answers here, just different interests operating. Much more could be said, of course.

Posted by Billie Pritchett at 9:44 AM