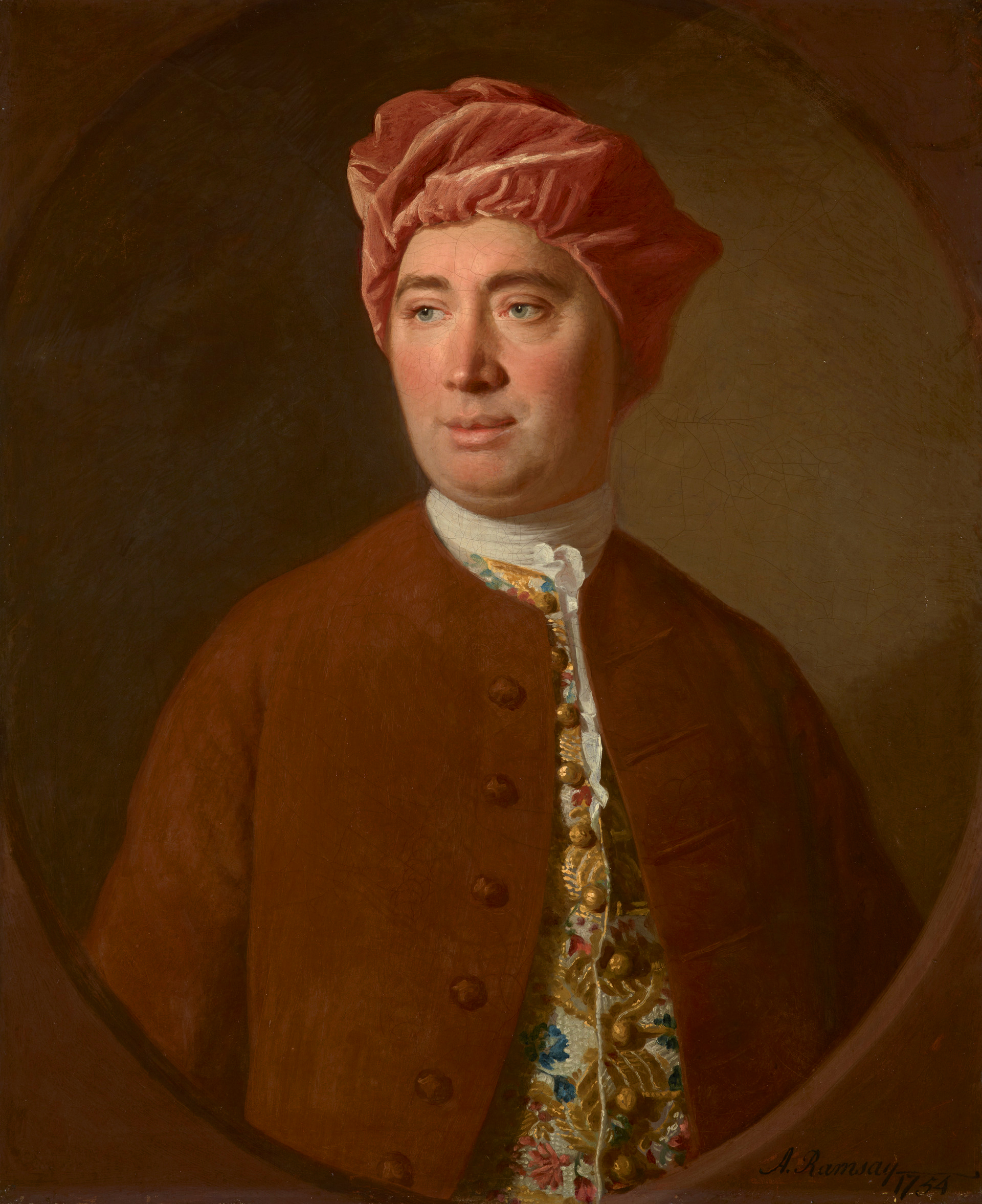 I dislike reading the Ted Hughes book of poetry and the Beth Nugent story collection so much, instead of reading one of those poems or stories a day, I'm going to do my best to push through both of those books today to get them over and done with. There are far more interesting books to read.
David Hume, "Of the Sceptical and Other Systems of Philosophy," Part IV of Book I: Of the Understanding, A Treatise of Human Nature
Meet David Hume (1711-1776), my favorite philosopher. He pushed the philosophy of empiricism, the idea that all knowledge comes from our senses, to its farthest extreme. In the first part of his book, he says let's assume that the empiricist philosophy is correct, that everything we know comes from the senses. How would it work?
Like this. We see something, and it immediately impresses itself on our mind in some mysterious way. Let's call these immediate perceptions impressions. Later, we can recall these experiences we have, or we could imagine similar experiences, and these objects of recall or imagination he calls ideas. With these couple of concepts, we could see how plausible the idea is that all our knowledge comes from experience, right? We're born into the world, have these experiences, they impress themselves on our minds, and later we recall and imagine things, and this knowledge in our noggins keeps building and building.
He proceeds to analyze different abstract concepts to try to defend how we could come to these by experience. Time, for instance. Well, we have this perception of subsequent changes. Space? Well, we have this perception of objects separate from one another. And so on. But then he arrives at an interesting puzzle. What of cause and effect?
Check out the animation below.

What we perceive is two balls colliding.
Well, not really. This is an animation. There is no real collision going on here. In fact, the way you animate something like this in Adobe Illustrator is to sequence images where the blue ball increases its proximity to the red ball and then when the blue ball is close enough to the red ball in one of the sequenced images you would change the location of the red ball in the subsequent images to be more distant from the blue ball. And, you know, strictly speaking, these aren't even balls but pixelated red and blue circles.
If we give a moment's thought about any of this, we know the above is just the illusion of cause and effect. Indeed, movie magic is just the illusion of cause and effect within the scene. We all know those aren't real people doing things up there on the screen but when we watch we suspend our disbelief and imagine them to be so.
Okay, so Hume says we know that there is a distinction between this kind of cause and effect illusion and the cause and effect we experience in our lives. Take pool, for instance. When we strike with the cue, there are real collisions that occur and those balls are moving away due to the force of the strike. But here is the puzzle: what exactly in the experience lets us know that cause and effect of pool balls on one another is any different than the illusion above or like the illusions we see in the movies?
Note Hume is not making a bigger claim here, the stoner dorm room claim of "How do we know what's really real, man?" He's talking about something very specific. He's saying that we if take seriously that all our knowledge comes from experience, what specifically in the experience lets us know that a pool cue was the cause of the white ball moving versus the kind of illusion above?
Hume is going to want to say that as a matter of fact there's nothing in the experience that justifies this distinction but it has something to do with the way our minds are constituted. We're built to intuitively understand the distinction between the illusion of cause and effect and actual cause and effect. Sometimes we're mistaken, obviously, but we have the capability to correct for the error.
All right, but then if we admit this, then we've got some knowledge in our noggins that doesn't come from experience. And in this essay, he begins to push this idea to the extreme.
Again assume all knowledge comes from experience. What in our experience lets us know that things exist when we're not in the room with them? Well, nothing comes from our experience, but we're built to perceive this as true. What in our experience lets us know that there is some "me" here? When I examine my thoughts, it's just a stream. I can't find a me. So nothing in the experience tells me there's a me. But like I said, we're built to infer a me behind all this buzz of experience.
So in the end either empiricism is false or else it's true and we're just wrong about so many of these things we think we know. If we have to give up one assumption, better to give up strict empiricism, no?
William Shakespeare, The Taming of the Shrew, in The Norton Shakespeare
A noble can't marry off his most beloved daughter Bianca until the elder sister, the shrewish Katherina, is married off. Wily Petruchio comes into town and says he desires to marry someone with such a fiery spirit. His first strategy is to match verbal wits with her. Once he weds her, he kills her with kindness. She's kept hungry because he sends away the meats and says they're not good enough for her, he keeps her up at night, claiming the bed and pillows are too rough, he sends away her new clothes, alleging they're not a great fit. Then when she is more inclined to be agreeable, he makes bold proclamations, she agrees, he contradicts them, she agrees with the contradiction. Finally, at a large banquet, when both she and her younger sister Bianca are betrothed, Katherina delivers a speech about how women are to be subservient to their husbands.
William Faulkner, "Barn Burning," Collected Stories of William Faulkner
A poor white family, tenant farmers, itinerant, moves from place to place for quick work. When the patriarch gets angry, he likes to barn down owners' barns. When the story begins, he has recently done it and gets away with it. Then the family is on to a new town where the take up residence in a shack on the estate of a large plantation. The disgruntled patriarch one day goes inside the plantation mansion and intentionally leaves footsteps of horse manure on the fancy front-hall carpet. A Justice of the Peace finds that he will owe ten corn bushels on top of the amount of bushels he is to produce for the plantation owner. So he decides to burn down the owner's barn. His boy tattles on him, the man gets shot, and the boy runs away.
Posted by Billie Pritchett at 4:44 PM