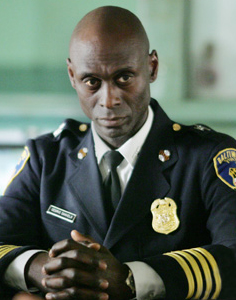 The Baltimore PD are finally doing their job and moving on the Barksdale drug gang but they want action and fast. Some quick arrests and some turnover of some drugs and arms will do fine.

Detective McNulty is unhappy with this. He wants the kingpin, Avon Barksdale. And now so does McNulty's lieutenant, Cedric Daniels. But Daniels is reluctant to make waves with the chain of command. Will he, though?

This episode reveals that someone else wants to upturn the Barksdale gang, and that's a rogue gangster named Omar, who with his two-man crew, stake out one of the easiest targets where the Barksdale gang deals and robs the stash.

The heat is on.

Posted by Billie Pritchett at 6:30 AM

Email ThisBlogThis!Share to TwitterShare to FacebookShare to Pinterest
Labels: TV