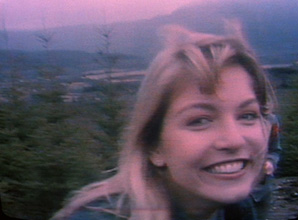 It's another tragic day in the town of Twin Peaks, Washington. Although the murder of high-school girl remains unsolved, her funeral is due today. But it's Pandemonium in Twin Peaks.

An investigator from the FBI has come to the town and wants to delay the funeral in order to a full autopsy. The local doctor is literally fighting with the agent. There is no need to either delay the funeral, and there's definitely no need to desecrate the body of this young woman, the doctor argues.

FBI special agent Dale Cooper, who has been in town for a couple weeks, intervenes. He admits that an autopsy will forego important evidence but it's more important to comply with the wishes of the townspeople, Cooper says.

When the funeral is underway, Audrey Horne's mentally delayed brother interrupts the wedding with a premature "Amen."

Laura's former boyfriend Bobby has a breakdown accusing the town of being implicated in the death of Laura. They all knew she had a drug problem, he cries. They all knew she was suffering. They did this to her, he says, gesturing to the grave.

Laura's secret former lover James jumps at Bobby. A fight almost ensues, but it's broken up by the police and friends and family of the opponents.

Laura's father, in a fit of grief, throws his body onto the casket. He falls face-first, and the mechanism to raise and lower the casket begins moving up and down uncontrollably. Laura's mother cries, "Don't ruin this too."

Email ThisBlogThis!Share to TwitterShare to FacebookShare to Pinterest
Labels: TV