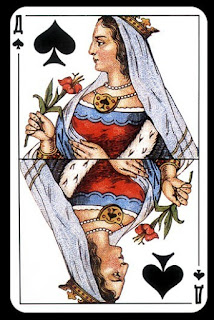 "The Queen of Spades" by Alexander Pushkin (story)

A Russian man, eager to earn a large sum of money, learns of an aged aristocratic lady who is said to have the power to guess cards. The Russian man wants to learn this gift so that he can win big sums. This is also part ghost story.

"All you hear in scattered rhymes the sound" (Canzoniere, 1) by Petrarch (poem)

Petrarch chastises himself. He knows people think him a fool for his love. He asks his audience to pardon his expression of sorrow.

There's a man named Rick Stevens who hosts a travel show, the soul focus of which is to get Americans disinclined to travel to travel. He has an agenda, to expand people's world's horizons, as his horizons were expanded when he was 14 and traveling throughout Europe, a time in which, observing other people on the crowded streets, it occurred to Stevens that people were living their varied and complex lives like this all over the world. The moment expanded Stevens' humanity, and Stevens hopes his audience's will be expanded through travel likewise.

Posted by Billie Pritchett at 2:44 AM