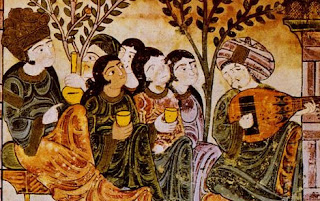 A woman recounts a moment in the 1930s when as a young girl she and her brother accompanied her father when he drove off his traveling salesman route to catch up with an old lady friend. The woman has an awakening as a young girl that her father has sides to him she wasn't aware of.

To Emerson, the woods will always sing you a new song. Each song will always be delightful, and you'll never tire of it. Everything manmade will disappoint.

Wallace tells the tale of his life as a Midwestern tennis-playing teen, explaining that his ability to calculate changes in ball trajectories in the face of the terrible winds on open courts gave him a brief but rewarding competitive advantage, that is, until he started playing indoor courts and then puberty hit the other boys sooner etc. Wallace's account of what happened to his teenage tennis career is a perfect illustration of what Nabokov described as the purpose of art, which is to turn life's accidents into ornaments.

Posted by Billie Pritchett at 4:42 AM