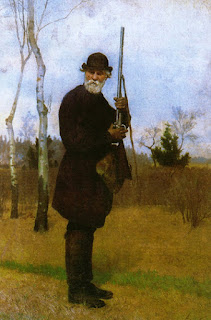 "Kasyan from the Beautiful Lands" by Ivan Turgenev (story)

A guy is on his way hunting. A funeral procession passes. The driver's carriage breaks down. The hunter and the driver have to carry the cart to the next village. In the village, the hunter meets a mystic who takes the hunter out to the field to do his hunting. The hunter shoots a nightingale. The mystic tells him it's bad luck to shoot a nightingale. A beautiful story. Nature is as much a character as the other folks in the story.

"The Tyger" by William Blake (poem)

Can the tiger that is Christ be the same as the lamb who is Christ? Apparently so.

It's a shame a person has to work under the compulsion of economic need. Thoreau envisions a world where people work for what's most fulfilling creatively. A delightful essay.

Posted by Billie Pritchett at 1:14 PM